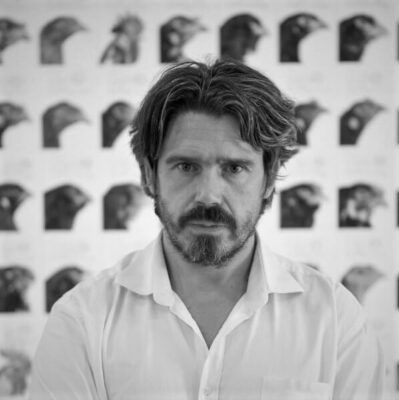 ‘I try to connect people and ideas, to find the right place in time and space to burst the egg, somewhere in the endless stream of collisions of happy accidents caused by infinite movement.’

Koen Vanmechelen is a conceptual artist and self-taught. After training at the hotel School, he worked as a pastry chef. His father was an artist and his mother a fashion designer. As a child he was fascinated by chickens, which is why he started as an assembly artist, who made bird cages.

Biocultural diversity is a paramount theme in his work; he works together with scientists from different disciplines. This blended approach earned him an honorary doctorate from the University of Hasselt and a prize: the Golden Nica Hybrid Art in 2013.

Vanmechelen has been working on the project The Cosmopolitan Chicken Project (CCP) since the late 1990s. The core of the project consists of cross breeding national chicken breeds with chickens from all parts of the world into “cosmopolitan chickens”. The scientists are mostly innovative technologists. Vanmechelen uses this research to make paintings, drawings, photos and videos, as well as sculptures made of glass and wood. The chicken and the egg became symbols to connect issues of science, politics, philosophy and ethics.

Koen Vanmechelen has presented his work in many places, in and outside Europe. He now has more than 3,000 chickens on eight farms on three continents.

A second project in which art and science mix is ​​The Walking Egg, which is a think tank that includes fertility specialists. With the Cosmogolem, a wooden giant symbolizes universal children’s rights. Together they form the Open University of Diversity, a meeting and debate center on the core themes of Vanmechelen’s work: biological and cultural diversity, identity, hybridity and ethics.

Vanmechelen’s work was shown twice during ART ZUID: in 2011 the Cosmogolem and in 2013 Coming World C.C.P. | Understanding C.C.P. The latter sculptures are both about globalization and a multicultural society.