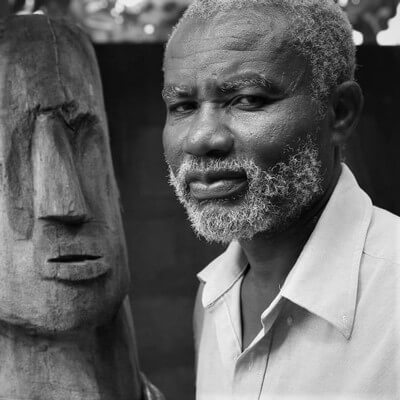 ‘First of all, I am human; that is my only fixed identity. I can turn myself into an African, French or English. That is just a formality, a matter of a passport. I can always change my nationality, my social identity. But I cannot change the fact that I am human.’

Kofi Setordji is a sculptor, painter and photographer. He worked as a graphic artist and billboard painter before attending Saka-Acquaye in 1984. In 1990 he won the Leisure Award Sculptor of the Year. That was his motivation to stop commercial work and to focus entirely on his own art.

He has exhibited all over the world both solo and in groups: in France, Italy, Denmark, Germany, Austria, South Africa and the United States. In 2002 his work was shown at the Modern Art from Ghana exhibition in Amsterdam.

Setordji’s work is widely appreciated; it explores historical themes, daily life and the realities of his existence in Ghana. He regularly gets involved in social and artistic debates.

He makes his sculptures from wood, metal, bronze, terracotta and stone. Commissioned by his hometown Accra, he made Entre Amies (Between friends), a five-meter-high sculpture for the National Theater. The multimedia installation Genocide brought him great fame. He built it in response to the situation in Rwanda, as a monument to the constant acts of violence and atrocities in the world.

In addition to his work as an artist, Setordji is a teacher and mentor at his ARThaus complex in Accra, where he invites students from all over the world to create, debate and discuss.

In the summer of 2013, at the third edition of ARTZUID, Setordji’s Ideas / Four Horse Riders was shown. Four Horse Riders, a wall painting no less than seventeen meters long, was on display in the Apollo Hotel.