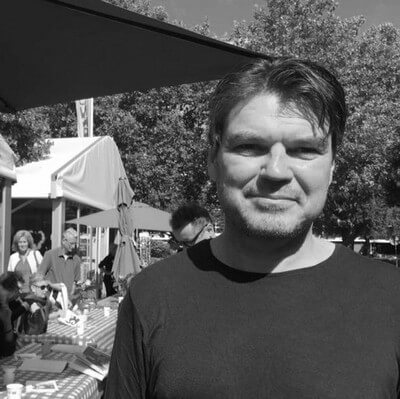 ‘Architecture is a huge world, which is very separate from art, but of course there is some overlap. In my work I use archetypal architectural forms: floors, walls, ceilings, colors, passageways. That is of course extremely basic. It touches architecture, but it is not architecture.’

Krijn de Koning is a sculptor and makes installations. He studied Audiovisual Design at the Gerrit Rietveld Academy and Ateliers ’63, both in Amsterdam. He then studied for two years at the Institut des Hautes Etudes and Arts Plastiques in Paris.

De Koning builds – often temporary – location-specific sculptures, with floors, walls and passageways. Sometimes these are immaculately white, sometimes brightly colored. They always have a relationship with their environment. For example, during ART ZUID (2017) Work for Art Zuid (the Garden) was shown; a labyrinth in different shades of green that merged into the leafy avenue.

His work is a cross between sculpture and architecture. It is an investigation into the way in which architecture limits and conditions us, what influence material reality has on our mental system.

Since 1999, De Konings’s ‘permanent sculpture’ for the Centraal Museum has been on display in the Centraal Museum in Utrecht. For this museum he was also an advisor for the architectural redesign and renovation. In 2000 he made a new work for De Vleeshal in Middelburg that reversed the relationship with the monumental, Gothic building, as it were. He also built a construction for the Mondriaanhuis in Amersfoort, inspired by the studio that Piet Mondriaan had in Paris.

Krijn de Konings’ works are often more complicated than is often thought. The external appearance is usually clear from a static point of view, but when the visitor walks around it, he becomes aware that it is much more complicated. The artist is always considering size, balance and beauty.