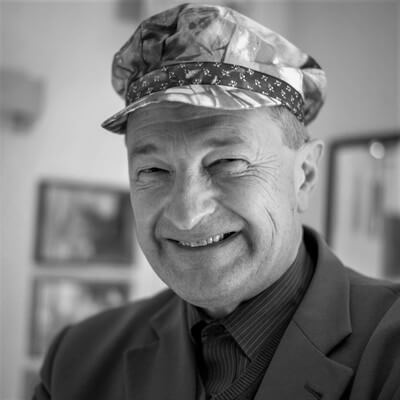 ‘The problem of the ardently passionate artist, is putting all his eggs in one basket,.’

Kurt Ryslavy is a sculptor, painter, wine merchant, collector, conceptual artist and poet. He combines art and gastronomy with his business insight. For example he has been importing wines from Austria to his hometown of Brussels since the late 1980s. He created the concept of the travesty of the bourgeois as an artistic expression.

Ryslavy has made numerous legal non-fiction documents in various media, such as videos, installations and performances. With these inventions and objects trouvees, which he combines with written texts, he breaks taboos around art and society.

Tür, a double door is almost symbolic and refers to his knowledge and love for art and wine. It was exhibited for the first time at the exhibition inbetween / inbetween in Deurle. This was followed by Beiwerk zu Tür, a metal box with a set of keys. This work could be interpreted as a response to Magritte’s work. The artist is profiled as industrious entrepreneur, not the face that critiques social or economic matters.

The painting facture decorative n ° (le monochrome avec son arrière-plan économique) represents the act of the purchase that seals the fate of a work of art. For an exhibition in Flanders, he made a work with two large, rough sand-lime bricks which he set up and carved into a coat of arms. Under it he chopped words: “grant recipient” or “scum”. Additionally he made four protective covers, three of which were labelled with a word, allowing for different word combinations. The passer-by could choose from the different ingredients and choose their position.

In the summer of 2017, ART ZUID showed his Good taste and Art Assets, depicting trees with a nod to Marcel Duchamp’s bottle rack. No bottles instead stacks of ceramic dollar bills. In one tree there were many notes, in the other few – referring to the market value of artists.