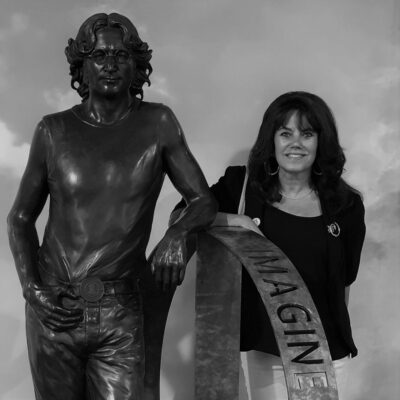 ‘I try to put ‘energy’ into my work. I create sculptures in quiet moments, in meditation. I like challenges and welcome large-scale projects. Art is the mix of a craft and a creative idea that comes from the soul.’

Laura Lian is a sculptor, and also paints commissioned portraits. Her sculptural work is diverse: from steel structures with fiberglass in public spaces to parapets for bridges, bronze plaques and commemorative statues.

In her teens, she was influenced by pop music and the energy of peace campaigns. Especially John Lennon’s way of resisting the post-war establishment inspired her. Laura Lian’s intent is to make her sculptures part of the community so that people can interact with them, take selfies and share their experiences with friends around the world. So far, the statue of John Lennon has raised £6million for charities.

During ARTZUID 2021, John Lennon Peace Sign (2018) could be seen in the hall of the Hilton hotel. It marked the 50th anniversary of John Lennon and Yoko Ono’s 1969 campaign against world wars. This traveling peace statue has previously visited Liverpool (home of the Beatles) and London. Lennon and Ono stayed at the Hilton hotel in 1969 for a few days before their Bed-in for peace.