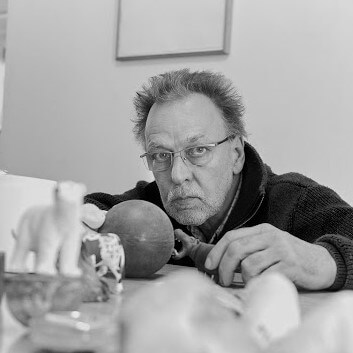 ‘It’s important to have things around you, because in the corner of your eye things happen that you can do something with. Perhaps it is even easier than when it is all too sharp on your retina. The casualness of serendipity makes more possible.’

Leo Vroegindeweij is a sculptor. He completed the MO Craftsmanship course and then followed a course at Ateliers 63 in Haarlem. For years he taught at the Willem de Kooning Academy in Rotterdam and was also affiliated with the Jan van Eyck Academy in Maastricht and the Amsterdam School of the Arts.

In the first half of the 1980s, Vroegindeweij’s sculptures were oriented horizontally. His ‘pedestal sculptures’ dealt with this and went up from that moment on. The capricious and personal character of his sculptures gave way to austerity and geometry. He was awarded the Buys van Hulten Prize (1977) and the Prix de Rome (1985).

Since 1985 Leo Vroegindeweij has been working with elements cast in concrete or cement. More and more industrial objects such as sewer pipes, steel chains and curbs are used. He then combines these with precious materials such as silver and marble. Despite the contradictions, there are constants in his oeuvre. He focuses on principles such as form and counter-form, positive and negative, matter and texture. Repetition of shapes and dimensions became his trademark.

Vroegindeweij was mainly known for his pleated sculptures made of lead, as tough they are vulnerable. In the 90s his work changed; for example, he made a fountain in the pond of the RIVRO (National Institute for Variety Research of Crops) in Bennekom. For the village meadow in Vaassen he made eleven hundred cast iron elements that formed a series of garlands around eleven plane trees.

In 2017, a huge mountain of stones dominated the green avenues of Amsterdam South. Leo Vroegindeweij set up his installation No Title on the ART ZUID route. It features a meter high hump of what would turn out to be light gray marble grit, against which a bright yellow tipper with an open body was placed. Practically a full size children’s toy.