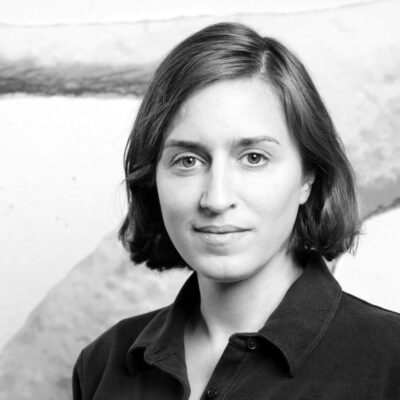 ‘Fables have always fascinated me, or even stories in which animals as protagonists critique power. Fables articulate the possibility of an alternative relationship between humans and animals.’

About Lin May Saeed

Lin May Saeed is a sculptor and makes drawings. She was born to a German mother and an Iraqi father who had fled his homeland. She studied at the Düsseldorf Art Academy and founded an exhibition space in Berlin in 2003. At home and abroad she exhibited a lot, both solo and in groups.

As a child she saw pictures of animal experiments that never disappeared from her retina. She became aware of what was at the root of animal suffering: ‘speciesism’, or the superior attitude of humans towards animals. Saeed became an activist during her studies and the subjugation of animals is one of the core themes in her sculpture. However, there is no screaming engagement.

It is Lin May Saeed’s dream that people will no longer kill animals for consumption, so that she can also freely call herself human. She conveys her moral message in a disarming, almost naive style. Her animal figures have nothing human about them. Despite the use of styrofoam – mostly construction waste, toxic and non-degradable – her sculptures almost look like classical statues carved from marble. It sounds contradictory, but it also reminds the viewer of the human impact of the use of materials on the environment.

During ARTZUID in 2021, two of her sculptures were exhibited. Kofi I is a man-sized bronze sculpture of a hybrid figure, between dog, bird and reptile. Thaealab III refers to the fox, in Arabic, her father’s language. The lacquered bronze animal stands on its hind legs and makes a shaky impression. In doing so, it appeals to the best in people.