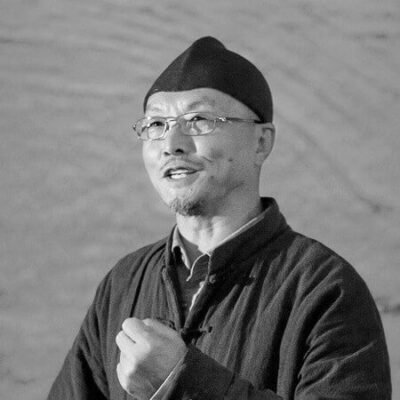 ‘I use paper to cut out this little red figure to reveal people’s vulnerability. Momentary. A human’s life is shorter than the thickness of the paper. The material is not important. More important is the process you use to make that material. This is more valuable to me.’

Lu Shengzhong specialized in the ancient Chinese art of paper cutting. He learned this from his mother, who grew up in Shangdong, the province that became known for this technique. It is used for weddings, festivals, and funerals. Lu attended art school at Shangdong Normal University. During his further education in the 1980s at the Central Academy of Fine Arts in Beijing, the art scene changed drastically.

Growing up during the Cultural Revolution, Lu Shengzhong did not follow the stream of artists who embraced the international fashion of installation art but opted for Chinese tradition. At first glance, his tableaux resemble calligraphic works; red tissue paper with white, mandala-like shapes.

In 2005 he published The book of Humanities, in which he describes his past and present works, as well as the three elements and his philosophy. The collages in the book are of small, red figures such as frogs and people. Lu is a professor in the department where he obtained his master’s degree; the Research Institute for Folk Art Studies department.

During the second edition of ART ZUID in 2011, Lu’s Shape and Shadow was shown, a work characteristic of his oeuvre in which the tension between two and three-dimensionality is palpable, which evokes a meditative attitude.