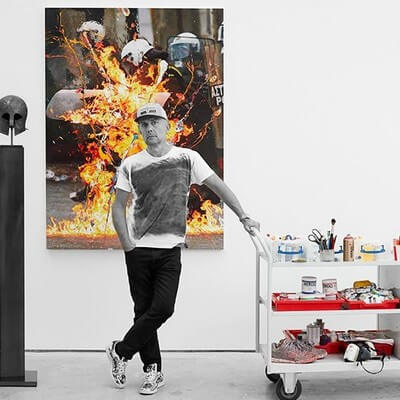 Marc Quinn is a sculptor, painter and photographer. He graduated from Cambridge University in 1986 and was one of the artists of the renowned group Young British Artists, who took the international art world by storm in the early 1990s.

Quinn draws attention with his eye-catching sculptures. For example his sculpture Self modelled from his own head, was formed from more than four liters of his own blood, which he had frozen.

His Pissing Man 12.5% ​​was one of the most remarkable works of Sonsbeek ’93. In front of the Reformed church on the Jansplaats in Arnhem, Quinn erected a double-walled frosted glass display case, containing a naked man who could only be seen occasionally. A red liquid spurted from his penis. The public criticism was vivid; nevertheless, the work is now in the garden of the Museum of Modern Art (Arnhem).

At the beginning of this century, Quinn made a radical change in sculpture, by falling back on classic materials such as marble and bronze. He is interested in physical processes but at the same time in the emotional expression of the human body.

By showing the material sides of life, Quinn confronts the viewer with contrasts such as beautiful – ugly, physical – spiritual and the eternal versus the transient. His choice of materials varies from traditional (bronze, marble and glass) to experimental (bread, blood, ice, lead and DNA).

Marc Quinn creates confrontational and spectacular works, but also sculptures that are moving and subdued. The amazement at the miracle of life is a common thread.

Quinn sees top model Kate Moss as his muse. He has made an ice sculpture of Moss and a bronze statue of Sphinx. In 2019 Myth (Sphinx) was shown during ART ZUID. The huge painted bronze statue depicts a scantily clad Moss in an almost impossible yoga pose, the work is over three meters high. It is offensive and at the same time awe-inspiring.