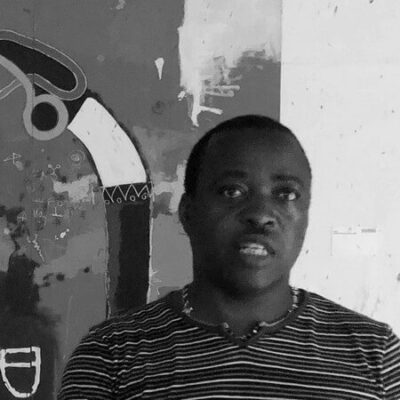 ‘In fact, for me, Africa is what the elderly do at home: they tell you about your culture, your history, everything that is important to know and that makes me stronger as an artist.’

Marcel Pinas is a visual artist, makes installations, paints and designs jewelery. His origins, that of the Marron, in the Marowijne district, plays an important role in his work. He studied at the Nola Hatterman Academy of Art in Paramaribo and then at the Edna Manley College of Visual and Performing Arts in Jamaica. A subsequent two years of the National Academy of Visual Arts (Amsterdam) did not bring any new dimensions to his knowledge.

Central to Pinas’ work is the future of Suriname, to which he wants to contribute. His work intends to encourage people to retain and record the remaining knowledge of the history of Suriname. The ultimate goal is to promote appreciation for the skills of the Aukaners in particular. He uses cultural objects of the Maroon, such as parts of a dugout canoe, pieces of paddles, fabrics, oil lamps and spoons. But also symbols that characterize the endangered cultures in his works.

Marcel Pinas has been exhibiting solo and in groups since 2006. Three years later he founded TAS (Tembe Art Studio) for local youth and budding artists, an exhibition space with art at an international level. In 2013 he started the Moengo Festival, where he combined music, theatre and dance with visual art.

Pinas contributed to the major Suriname exhibition in the Nieuwe Kerk in Amsterdam (2019). With his installation, he drew attention to the mass murder in Moiwana. In 1986, 38 civilians were killed by the Surinamese National Army. The installation consisted of a long table with 38 chairs, covered with black and white cloths, like a funeral ceremony. On the table are 38 plates with newspaper photos of soldiers and corpses.