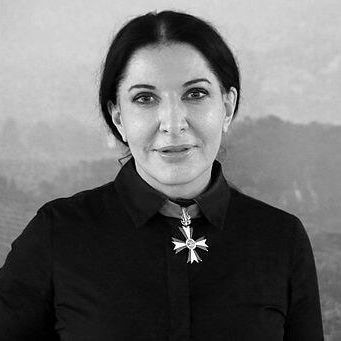 “Most people avoid threats and the great unknown. Through engaging with those situations you’ll open your mind to new experiences. Our performances aim to inspire people to take that leap.”

Marina Abramović studied at the Academy of Fine Arts in Belgrado from 1965 until 1970, she then continued her studies in Zagreb for the duration of two years. Her initial artistic focuses are performance and video art.

From 1976 until 1988 she collaborated with the artist Ulay (Frank Uwe Laysiepen, 1943-2020), with whom she also lived. The toleration of long-lasting physical pain played a fundamental role in their work, they often challenged their own physical and mental endurance. An example being their recording of Breathing in – Breathing Out (1977) which at first sight looks like a passionate kiss. Upon closer inspection, one can see that their noses are stuffed with cigarette filters; forcing them to breathe each other’s air for nineteen minutes uninterrupted. In their final performance, they walk towards each other across the Great Wall of China, where they have reunited after three months apart. The expectation was that they would get married there however The Great Wall Walk repurposed as the moment they said their final goodbye.

In 1982 and 1992 Abramović took part in the Documenta 7 and 9. The exhibition in Kassel takes place once every five years, has been considered the most important exposition of modern art since 1955.

In 2010 the MoMA (Museum of Modern Art) in New York, hosted a big retrospective solo-exhibition of Abramović’s work. In the performance, The Artist is Present, Abramović sat in a chair at a table for six days a week, three consecutive months. Visitors could position themselves in the chair opposite her. They were allowed to look at her but were prohibited from touching or communicating with her. The highlight of the performance is Ulay’s visit, who unexpectedly sits across from her after not having seen each other for 23 years. Abramović had looked at thousands of faces and barely flinched. Now across from Ulay, she was visibly emotive and affected. After some time, despite the strict rules of her performance, she decided to hold his hand for a minute.