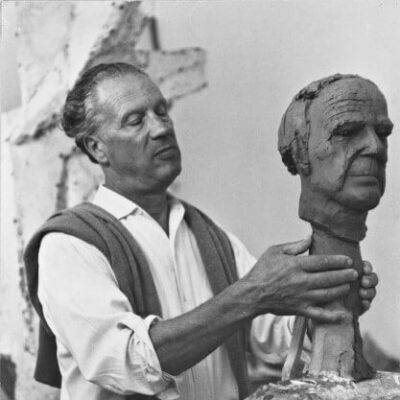 ‘There is an intimate relationship between my painting and sculpture. I would never start a sculpture without first getting a sense of color. (…) My mind is seized by it until I put the color on paper and imagine that this color becomes a drawing. And then, all of a sudden, the drawing begins to take shape, the shape, and this shape becomes the true shape.’

Marino Marini was a sculptor; he is considered one of the most famous sculptors of the modern era. He started his training at the Accademia di Belle Arti in Florence: studying painting, drawing and sculpture. From there he traveled regularly to Paris, where he became acquainted with, among others, Massimo Campigli, Giorgio de Chirico and Alberto Magnelli.

Marini was particularly influenced by the sculptor Arturo Martini, whom he would succeed as professor in Milan in 1940. In 1939 Marini moved to Switzerland, where he met the sculptors Alberto Giacometti and Germaine Richier. A year after the war, Marini settled in Milan. Later he would meet other artists such as Hans Arp, Max Beckmann, Alexander Calder and Henri Moore. Marini took part in Documenta 1 (1955) and 3 (1964) in Kassel.

Marino Marini was inspired by the archaic period in Greece and the design of the Etruscans. Central to his work are themes such as the female nude, portrait busts and riders on horseback. His work gradually became more abstract.

Most large museums and sculpture parks have statues of Marini. In the Netherlands, his work can be seen in Museum de Fundatie (Zwolle), the Kröller-Müller Museum (Otterlo) and of course in the Marinipark (The Hague).

In 2013, ART ZUID showed Marini’s Composizione di Elementi, a bronze sculpture consisting of a series of separate elements, which reflects the theme of the equestrian statue.