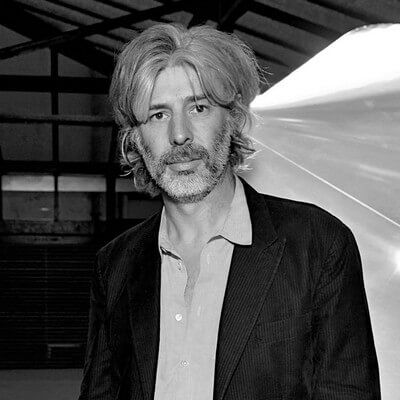 ‘It is clear that sculptures are by definition stuff; and stuff is really a manifestation of desire, it is the material of carefully considered desire. And somewhere in these things lurk human emotions of … despair, hope, strength, possibility, failure … which the sculptures become vessels of.’

Mark Handforth is an english sculptor but has lived and worked in Miami, Florida since 1992. He grew up in London and attended the ‘Staatliche Hochschule für Bildende Künste’ in Frankfurt am Main and the ‘Slade School of Fine Art’ in London.

He makes large-scale sculptures which reflect objects from public spaces, mostly street furniture: street signs, street lamps, traffic cones and fluorescent light tubes. Not infrequently, he twists or bends them or covers them with dripping paint or wax from burning candles. His work is considered both site-specific art and “minimalistic”. Some draw parallels with pop art and surrealism.

Mark Handforth’s first solo exhibition in the United States was held in 1996 at the Museum of Contemporary Art North Miami. In 2011-2012 he exhibited there again. In 2004, 2006 and 2010 his work was exhibited at the Modern Institute in Glasgow.

Handforth often takes objects from everyday life or popular culture – a satellite dish, a Vespa – and changes them by re-appropriating them. Cultural icons such as star, stop sign or heart are prominent in his work. Lamppost (2003) in Manhattan (New York) was the first of a series of twisted and curved lampposts. It was curved in two places, so that it would rest on the ground and illuminate the public space with a red glow.

During ART ZUID 2011, Platz was shown, a work intended for the square opposite Zurich station. Strongly enlarged links of chains are reminiscent of sea shipping.