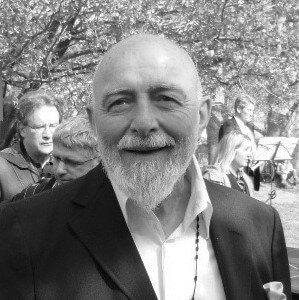 ‘Painters have a completely different view of sculpture than sculptors. The sculptor makes sculptures, but we make figures from images. It doesn’t matter whether they are abstract or figurative, we transform the distortion of painting into sculptures.’

Markus Lüpertz is a sculptor, painter, graphic artist and writer. Born in Reichenberg (now Czech Republic), his family moved to the Rhineland in 1948. During an apprenticeship as a wine label painter, young Lüpertz was fired for alleged lack of talent. From 1956-1961 he studied at the Werkkunstschule in Krefeld. He only spent one semester at the Kunstakademie Düsseldorf – which he later referred to as a fiasco and shameful defeat.

Lüpertz thinks ‘subjects are characterized by archaic monumentality and suggestive power’. His works are classified as neo-expressionist. He has been working as a freelance artist since 1961. In 1964 he founded Galerie Grossgörschen with a number of others. In 1970 he was able to go to Florence for a year on a working grant. His name became further established after receiving the Prize of the German Association of Critics in 1974.

That same year he accepted a professorship in painting at the Academy of Fine Arts  Karlsruhe. Later he occupied similar posts in Salzburg and Düsseldorf. He would be headmaster there for more than twenty years and would bring internationally renowned artists there; among them A.R. Penck, Jannis Kounellis, Rosemarie Trockel, Jörg Immendorf and Tony Cragg.

Lüpertz has been making sculptures since 1980, of which the ‘Apollo figure for the Alte Oper’ in Frankfurt is one of the best known, as is ‘The Ugle Scares the Beauty’, for a bridge in Karlsruhe.

The bronze statue Judith, a biblical heroine, was shown at ARTZUID 2013, unconventionally she was depicted without her sword and was holding the severed head of Holofernes in her hand. Two years later, the partly painted bronze statue of Mozart was featured in the subsequent edition of ART ZUID.