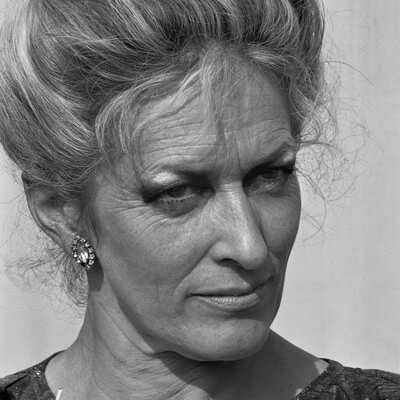 ‘As a child I was better at drawing than talking’

Marte Röling is a sculptor, painter and designer. From the age of sixteen she took drawing and painting lessons at the National Academy of Visual Arts in Amsterdam. After her training she was asked by Jeanne Roos, who worked for Het Parool,  to draw models. There she became acquainted with pop art, which would leave a lasting mark on her later portrait work. She translated this fascination through the use of thick, solid lines around the models she drew.

Since her twenties, Röling has been exhibiting in Europe and the United States with large paintings and sculptures. In 1965 she won the Culture Prize of the municipality of Hilversum. In the 1980s she created iconic, monumental works that became widely known as the portraits of Queen Beatrix and Prince Claus, the Flag Monument at the Academic Medical Center in Amsterdam and the sculpture Non scholae, sed vitae for the University of Groningen.

Marte Röling also designed sets and costumes for theaters, stamps, record covers, murals and posters. The tram she painted attracted a lot of attention. This also applied to her work; the Starfighter, which stood in the garden of her farm in Uithuizen until 2012. There she lived with visual artist Henk Jurriaans, until his death in 2005, Alissa and Adrienne Morriën and the artist Wanda Werner. After Jurrian’s death she made many large colorful paintings of him in her famous pop art style.

ART ZUID showed Rölings De Grote Vette Vredesduif in 2013, a sculpture she made in 2002 from the materials; glass mat, polyester, lacquer and gold leaf. She made a number of these doves, intended for the Floriade in the Haarlemmermeer that year. The pigeons have grown into mascots in a very short time.

Röling’s work is housed in public and corporate collections such as those of the Cultural Heritage Agency of the Netherlands, Museum De Fundatie (Zwolle) and Waternet (Amsterdam). Private collectors also own work by Röling. She is concerned with beauty and emotion in her art.