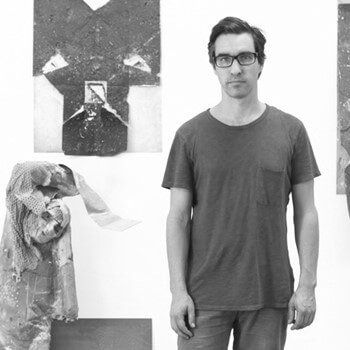 ‘There is real craftsmanship in my work, but there is always a breaking point. I cherish something to some extent and can even develop some sort of icon, but the real energy comes from my iconoclasm, my anti-craftsmanship. Sometimes the piece does not survive the process.’

Matthew Monahan is a sculptor, draftsman, painter and installation artist. He graduated from the Cooper Union School of Art in New York in 1994 and then spent two years at De Ateliers in Amsterdam.

In his enigmatic human figures, figuration and abstraction collide, as do mystery and recognisability. This theme is carried through in his use of atypical materials that often form contrasting combinations, for example paper and stone. Monahan’s sculptures create an atmosphere of distance and tranquility, intended to spark contemplation; but they are also very bold and speak to their audience.

The shaping of his sculptures, whether carved, cast, or constructed with materials ranging from wax to bronze – suggest archaeological finds, decaying relics of long-lost civilizations, past or future. These can be interpreted simultaneously as warnings or reminders.

Monahan’s sculptures have been exhibited in galleries and museums around the world: from Los Angeles to Xiamen, from London to St. Petersburg. In the Netherlands his work has been shown in Museum Boijmans Van Beuningen (Rotterdam) and the Fries Museum (Leeuwarden). In 1999 he took part in the Liverpool Biennale. De Nederlandsche Bank and Rabobank have included works by Matthew Monahan in their corporate collections.