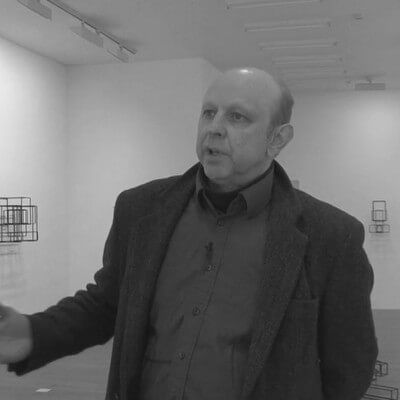 ‘My inspiration comes from nature, but my work does not imitate nature.’

Michael Jacklin is a sculptor, draftsman and installation artist. Since 1984, he has been making sculptures from industrially manufactured iron and is one of the only active sculptors of his generation that still works with proper fundaments. This is evident from his attention to the pure properties of the material and to the sculptural principles such as measure, rhythm and gravity.

He gave the soft, round shapes lyrical titles like hidden among the clouds. In the nineties his style tightened and he switched to abstract constructions, usually made of steel.

Initially he was guided by the minimalism of sculptors with whom he felt an affinity, such as Donald Judd and Sol LeWitt. He created box-shaped sculptures inspired by architecture and bridge construction. His later images are more transparent, partly because of the more open grid patterns.

He mainly makes free work, he has a large work of art exhibited in Amstelveen, a commission from the municipality. It was placed in 2004 and moved eleven years later to the central reservation of the Keizer Karelweg. Other work is in The Hague and Aalsmeer. The sculpture group on the facade of the subdistrict court building at Kop van Zuid in Rotterdam is well known. In 1990 Jacklin was awarded the Charlotte van Pallandt Prize.

In 2002 he had a presentation at the Stedelijk Museum in Amsterdam. His work can be found in various public and private collections. With two images – Untitled and Soul Survivor – Jacklin was shown at ART ZUID 2017.