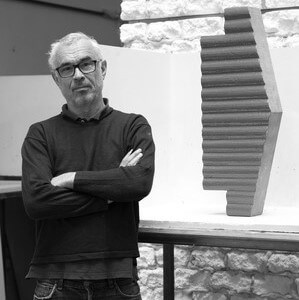 ‘It is about making works that are as minimally figurative as possible and have the strongest possible content. I look for abstraction by starting from the form, all forms, hoping to evoke an intense content.’

Michel François is a sculptor and combines various disciplines. He uses all kinds of materials and media combining industrial and natural objects, photos, videos, sculptures and installations. After getting a degree in Drama, he obtained a diploma from the Ecole de Recherche Graphique in Brussels, where he would later be in charge of the sculpture workshop.

With his works, he makes a kind of inventory of the world around us. In doing so, he makes use of opposites: hollow and convex shapes, empty and full, light and dark. He also refers to contradictions about social structures such as freedom and imprisonment, work and leisure, wealth and poverty.

François became internationally known for his participation in Documenta IX (1992) and the Biennale Sao Paulo (1996). At the Venice Biennale (1999) he hung the Belgian pavilion full of dandelion fluff balls and thus defied the public. Of course, that did nothing more than give them the urge to blow the flowers out.

Michel François seems obsessed with metamorphoses. In the photo of a huge felled tree, titled ‘Rhino-Tree’, it’s close to impossible to spot a reclining rhino in the thick trunk. His Pièce à Conviction, a gigantic tractor tire, which was shown at the third edition of ARTZUID, is a “piece of evidence” that contradicts any imagination anyone can have about it.

François sharpens our senses. His fascination for materials, shapes and representations and the way in which he registers and presents them, disrupt expectations and offer new meanings. In his own words, he is always looking for ‘the beauty of the experience’.