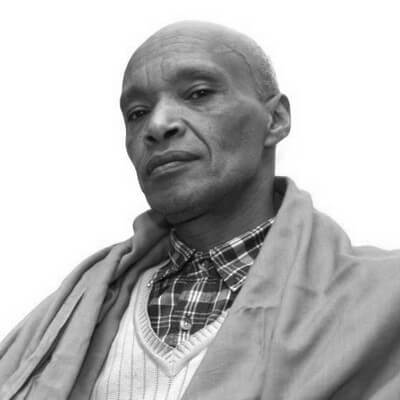 ‘As a sculptor, I transform matter. I glue flesh to a skeleton, and I dress the plant-like creatures with colours.’

Mickaël Bethe-Selassié is a sculptor who became known for his cheerful, colourful work in paper-maché. He also makes paintings and reliefs. After graduating from high school, he fled his homeland Ethiopia for France in 1971 at the threat of a revolution. There he embarked on a study of physics. His fascination with religions- from the Catholicism with which he grew up with to Zen Buddhism- led to his artistry. Around the age of thirty, he started making large sculptures in paper-maché on structures of chicken wire as an autodidact.

Bethe-Selassiés’ work is not easy to categorize. Some see similarities with outsider art whilst others think he is a Western artist and draws parallels with Karel Appel. Some recognize traditional African primitive art in his work.

The artist works without a preliminary drawing. He bends a fixture from wooden slats, rattan canes and chicken wire, The unruly rattan cannot always be bent into the desired shape. His human forms, animals and plants are derived from reality. While improvising, he enlarges and caricatures them; thus they become dream figures, gods, goddesses, totems and mythical animals. Bethe-Selassié ensures a balanced and stable structure of the often gigantic mysterious images. His use of colour is bright and warm. It is a combination of imagination and manual labour. By re-using paper, the artist indirectly gives new life to the trees. He says he does not allow himself to be influenced by anything of anyone and always goes his own way.

Works by Bethe-Selassié have been shown all over the world, including in 2011 in the SBK in Amsterdam. His work is also included in the permanent collection of the National Museum of African Art in Washington. Bethe-Selassié lives and works in Paris.