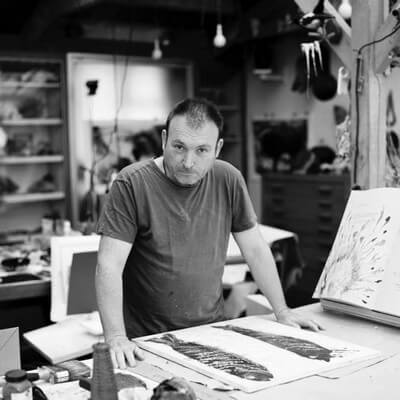 ‘It is a self-portrait: I made myself while painting. The shadow seems to reflect the other part of myself and at the same time is the destruction of the order.’

Miquel Barceló is a painter, designer and sculptor who works primarily with ceramics. After two years at the School of Arts and Crafts of Palma, he studied at the School of Fine Arts in Barcelona for two months. He returned to Mallorca to participate in the happenings and protests of the group Taller Llunàtic, a conceptual avant-garde group.

A year after returning to Mallorca, he had his first solo exhibition at the Palma Museum. At first, the avant-garde, art brut and American abstract expressionism influenced the work of Barceló. He was also intrigued by the Baroque paintings of Velázquez, Tintoretto and Rembrand. In turn, Dubuffet inspired the young Barceló to take an experimental stance.

In the 1980s he travelled extensively throughout Europe, the United States and West Africa; but always returned to Paris. His participation in Documenta 7 in Kassel (1982) gave him international recognition. Four years later, he was awarded the Spanish National Prize for Visual Arts.

In the Cathedral of Palma, Barceló covered the entire chapel with terracotta and decorated it with images related to the sixth chapter of the Gospel of St. John; the miracle of the multiplication of bread and fish. At the end of 2008, the Spanish government officially presented Miquel Barceló’s latest work of art at the United Nations Palace in Geneva. It’s an immense sculptural installation on the vaulted ceiling of the building’s newly created Human Rights Chamber XX and Alliance of Civilizations. The work consists of 1500 m2 of multicoloured dripstone shapes for which the artist used a hundred tons of paint, which seems to drip from the ceiling.