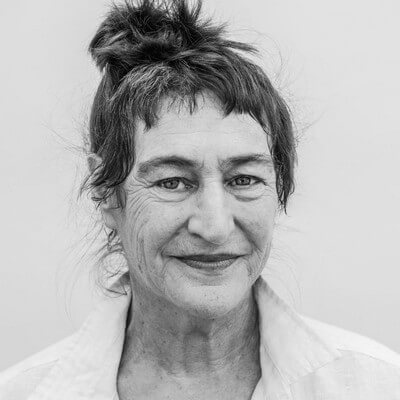 ‘I realized this stuff has been around for a long time and it has gone through this strange transition. Before it was in Earth, it floated like a molecule in space – it was part of someone’s star or someone’s exploding planet.’

Nancy Rubins is a sculptor and installation artist. She studied at the College of Art at the Maryland Institute in Baltimore and the University of California. There she mainly worked with clay and created igloo-like objects from mud, concrete, and straw.

She avoided the characteristic durability of ceramics, as she continued to disassemble and peel off her sculptures. Her works ‘Mud Slip’, ‘Army-Surplus Canvas’ and ‘Used Cups from Coffee Machine’ (1974) consisted of found objects and wet clay. As long as the clay stayed wet, the work existed.

In 1980, Rubins was commissioned for her first public installation. ‘Big Bil-Bored’, which was made up of various discarded devices, became a controversial work of art. The sculpture was voted “ugliest statue in Chicago” in a radio poll. This did not alter the fact that subsequent assignments would follow.

Nancy Rubins became known for her grand sculptures, often weighing thousands of kilos. For a long time, she used discarded aircraft parts. Not wood, but more sustainable materials such as aluminum, composites, and fiberglass. In the late 1980s she started working with discarded mattresses, which she transformed into colossal cakes. After the turn of the century, the mattresses made way for boats and discarded playground equipment.

In 2019 ART ZUID showed her ‘Agrifauna Delicata I’, a whirlwind, an outburst of birds and deer, which are propelled into the air by an unknown force.