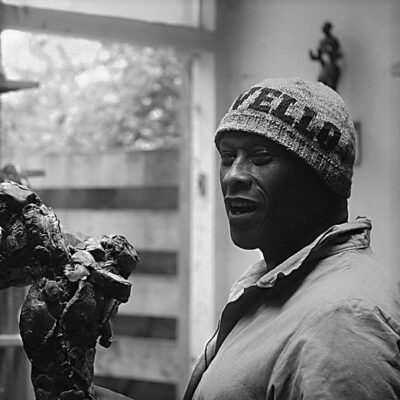 ‘Isn’t the craft of visual art nothing more than capturing feelings in the most authentic way possible in words, in sound, movements, images, color, or form?’

Nelson Carrilho moved to the Netherlands when he was eleven. He graduated in 1980 from the Artibus Art Academy in Utrecht. He has developed a critical eye for society and comments on social abuses in a humorous way. His sculptures are often figurative and based on traditional elements that have their roots in Africa and the Caribbean.

In many of Carrilho’s sculptures, there is sometimes biting humour, but also poetry. In doing so, he puts the dark sides of human character into perspective. He follows world politics with a suspicious eye. He observes, cannot exert any influence, but comments on his work. Nelson Carrilho’s work is not only an indictment, but it’s also about liberation and the emotion that can evoke in people. About power and impotence, justice, and injustice.

Carrilho’s social involvement is apparent in his works, which have been given a place in public space in both the Netherlands and Curaçao. The unnamed bronze statue on Mount Arrarat in Curaçao is a powerful four-meter-high figure, crowned, as it were, with universal symbols, such as water, fish, and wheels. The statue fights against the enormous space around it like a thud of force.

‘Mama Baranka’ is located in Amsterdam’s Vondelpark, it is a large statue that he made following the murder of the black boy Kerwin Duinmeijer by a skinhead. In the Westerpark, also in the capital, is the statue ‘Bearers from a-far’, it symbolizes the multicultural nature of the city. Its theme is the constant movement of people from continent to continent.

‘The Other Face’ and ‘Bearrers from a-far’ (1989) were shown at ARTZUID 2021. Carrilho made the ‘The Other Face’ sculpture in 2021 for the empty southern Italian villages, where the accommodation of refugees is met with great resistance. He made the statue at the request of the municipal council of one of the mountain villages