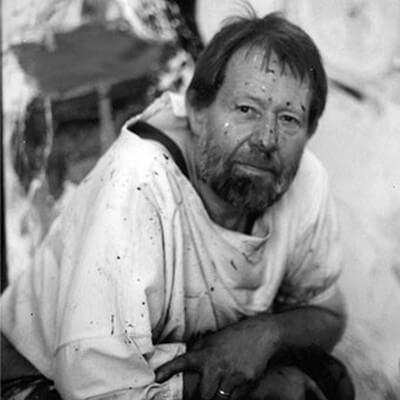 ‘I make my sculptures for everyone. Everyone is allowed to experience my work. My sculptures reflect me. When they come across, people feel the inspiration that I have placed in them. When they feel that, I hope it makes them happy.’

Nic Jong was a sculptor, painter, ceramicist and graphic artist. He started his career as an advertising draftsman to earn a living. Later he took evening classes at the Applied Arts School in Amsterdam. Wessel Couzijn taught him how to draw and sculpt. He finished his sculpture education at the Rijksacademie.

He found his direction in smooth, flowing and abstract shapes. He wanted to express his sense of connection with prehistoric man and used mythological stories as a framework for his sensual themes such as women, love and fertility. Water is a recurring element, which not only returns in titles, but also in aquatic animals and wavy shapes.

In the mid-1960s he settled in Grootschermer, North Holland, where he started a sculpture garden and a museum. The garden features colossal sculptures of women and animals; including horses and swans. His paintings are expressionist and monumental. His versatile oeuvre also includes ceramics, jewelery and objects made of perspex, glass and steel.

In many ways Nic Jonk was a classic sculptor from the 19th century tradition with a solid knowledge of bronze casting.

More than two hundred of his bronze statues have found a permanent place in the Netherlands. But his sculptures can also be seen abroad, in Germany, Belgium, France, Spain, Italy and the United States.

Jonks Woman standing on 1 leg, which was shown at ART ZUID in 2019, refers to his sources of inspiration; Auguste Renoir, Aristide Maillol and Antoine Bourdelle. They also made many statues of female nudes.

Nic Jonk died in 1994. A year later the museum was renewed and the sculpture garden expanded. These can still be visited.