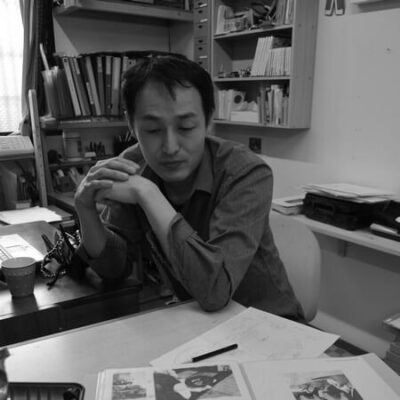 ‘My BATTAmon work could not rest in peace. Since it was my personal opinion, I tried to get people to judge.’

Okamoto Mitsuhiro is a conceptual artist and sculptor. He lives and works in Kyoto and exhibits mainly in Japan, although his first exhibition took place in 1999 in Aarhus, Denmark.

He made many of his sculptures with counterfeit goods. In 2010, for example, he made a series of nine statues (BATTAmon), including a grasshopper, from imitation bags of well-known names such as Louis Vuitton, Chanel, Gucci and Fendi. These were removed from the Kobe Fashion Museum after a few weeks when the Louis Vuitton firm decided that the illegal trade in counterfeit products was damaging to its corporate image. To avoid legal disputes, the museum removed the art works.

In 2015, a gallery at the Art Fair featured Sapporo Mitsuhiro’s Outside after Famina: Outside Family Mart, a work with a sensor that detected the human body and emitted a sound that welcomed people at the entrance. The idea behind this concept is based on revenge, alertness and appreciation for “etching the melody in our memory, even though we never ask for it.”

He made another series location-specific. His work UFO (Unidentified Falling Object) is a mixture of absurdity and uniqueness. His work has been shown in seven solo exhibitions, fourteen group exhibitions and three art fairs.