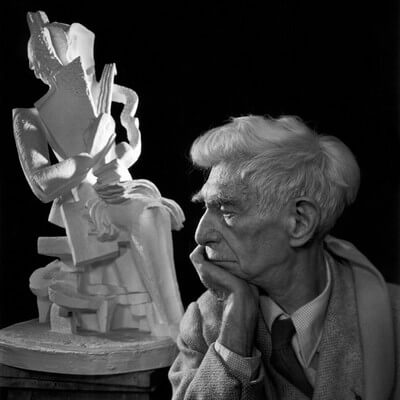 ‘I saw a crater in the body of a city, an immense wasteland, a blackened and torn church rose up there like the molar of a prehistoric animal spewed out by a volcano.’

Ossip Zadkin was a French sculptor, painter and lithographer of Russian descent. He was born by the name Yossel Aronovich Tsadkin. His mother was Scottish and in 1905 he was sent to England. Three years later he took classes at the Arts and Crafts School in London. In 1909 he settled in Paris and met Archipenko, Chagall and Léger among others, where he became close friends with Modigliani.

In the First World War he was wounded as a soldier in a gas attack and was given French nationality. His work was strongly influenced by Cubism; it would take until 1926 before he developed his own style, inspired by primitive art. Zadkine took part in exhibitions at home and abroad in the interwar period.

In 1941 Ossip Zadkine fled to the United States, where he stayed until 1946. He met other French exiles there and gave sculpture lessons in New York. When he got back to Paris, he opened his own studio, mainly aimed at American students. He taught hundreds of students at the Académie de la Grande Chaumière, including Jan Wolkers, in 1957.

Zadkine became known with the sculpture The destroyed city in Rotterdam. There is also a sculpture of his in Zundert, in memory of Vincent van Gogh. It was unveiled by Queen Juliana in the presence of Zadkine. Many museums in the Netherlands have works by Zadkine in their collection, including De Fundatie (Zwolle), Van Abbe (Eindhoven) and Kröller-Müller (Otterlo).

Ossip Zadkin died in 1967. During the first edition of ART ZUID, in 2009, La Demeure Humaine (the human enclosure) was exhibited. Zadkine made this sculpture in the period 1963-64 on behalf of the Nederlandsche Bank. It was, like many of his sculptures from that time, open. Since 1990 it has stood on a high pedestal in front of the Dutch Bank.