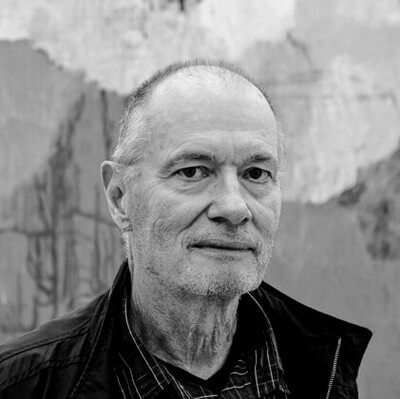 ‘They say that I paint landscapes, but then they are pornographic landscapes, because I abuse them. I am old fashioned. I sit in my studio, look outside and see the garden. I copy the green. I can only paint what I see, I don’t know pure abstraction.’

Per Kirkeby was a sculptor, painter and architect. He was originally a geologist. He became known for his geometric brick sculptures. In his paintings he depicts powerful and dangerous nature. These works consist of different, softly modulated layers of color where the influence of his geological background can be felt.

Recurring themes in Kirkeby’s work are the landscape and the earth as a primal force. He expresses this in paintings of strata, caves, fossils, glaciers and rock formations – always balancing between abstraction and figuration.

(Art) history was important to him. He collected correspondence from Henri Matisse, letters from Vincent van Gogh and Samuel Beckett. Pablo Picasso, Kurt Schwitters and Asger Jorn were also important sources of inspiration for his work.

In 1982 Kirkeby took part in the leading exhibition Zeitgeist and two years later in Von hier aus – Zwei Monate neue Deutsche Kunst in Düsseldorf. Both exhibitions showcased contemporary neo-expressionism. He took part in the Venice Biennale and Documenta 7 and 9 in Kassel. In the Netherlands his work was purchased by the Kröller-Müller Museum and Boijmans van Beuningen.

Figur, a sculpture from 1983, which was shown during ART ZUID in 2015, it’s a good example of a series of sculptures he made from the 1970s. They are inspired by the human body, landscape and architecture. At first it is not clear what the amorphous figure represents. Gradually, the viewer discovers a human figure built from layers of clay and then cast in bronze.