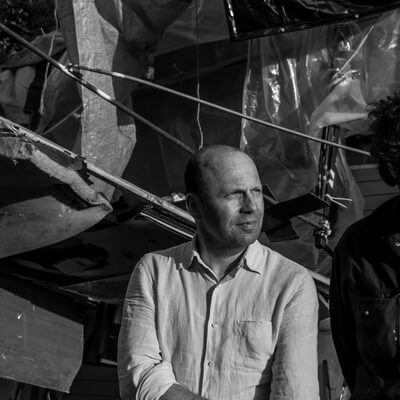 ‘I don’t like to use the word chaos. I am talking about complexity. Just because you don’t understand something doesn’t mean it’s chaos. Chaos has a negative connotation.’

Peter Buggenhout was educated at Sint Lucas in Ghent, where he still resides and works. He started out as a painter and designer. He became known primarily for his sculptures and installations. These often look strange and unattractive. They are often composed of various materials that are considered to be waste, both organic and results of human activity. With scrap metal, plastic, hair and organs, he questions the state of the world. With the unknown direction it is taking; it connotes the feeling of helplessness that arises in people when they face the chaos of a world that escapes them.

He turns bodies inside out, analyzes and dissects them, pretending to expose the soul. By showing the sculptures in an alienating environment, he emphasizes the physical deterioration, the imperfect perfection of our inner factory and related themes such as erosion, volatility and incoherence.

Buggenhout elevates his installations to art, making the confrontation “digestible” and not repulsive. The sculptures radiate great strength and resilience and hide nothing. They are direct confrontations with physical imperfections. At the same time, the viewer experiences these himself as a voyeur.

Peter Buggenhout not only makes colossal installations but also smaller sculptures on pedestals and in display cases. He uses all kinds of materials for this. What at first sight appears to be a haphazard accumulation of materials turns out to be a carefully composed chaos. It gives his images an anonymous and indeterminate character, with a fragile and uncomfortable beauty.

His first work was exhibited in Belgium in 1983; it would take until 2007 for his first exhibition to take place in Paris. He has exhibited in the Netherlands, Germany, the United States, Israel and India.