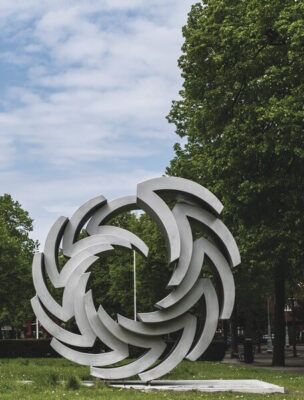 ‘The old monument was a terrible thing, not actually a monument at all, but a traffic obstruction. It was a triangular tower consisting of three fields of reliefs with weapons on them.’

Piet Killaars was a sculptor, draftsman and made collages. At the age of 17, he started working for a ceramic company in his hometown of Tegelen. A new arts and crafts department was started there, which gave artists the opportunity to produce their works in ceramics. Killaars provided them with technical support, including Charles Eyck and Suzanne Nicolas.

In 1941 Killaars went to Maastricht where he attended the Secondary Arts School (later the Academy of Visual Arts). He made a living in a local ceramic workshop. It is unsurprising that he produced his first artworks in ceramics.

After the war he traveled and worked for various sculptors in the Netherlands and Belgium. In France he became acquainted with the work of Jacques Lipchitz and Alberto Giacometti, among others. He then continued his sculpture training at the Jan van Eyck Academy with Oscar Jespers. Later he became a teacher at the art schools in Tilburg and Maastricht.

Killaar’s work is figuratively geometric and often draws back to the laws of nature, energy and growth. The relationship between man and nature is central to his early work. Later his spectrum broadened to represent rhythm and movement. Still later he shifted the focus to cyclical movements: the arms of a conductor or the eternal waves of the sea.

Killaars used both concrete and stainless steel for his sculptures. Many reliefs are known from his hand. After the war he received commissions for memorial monuments, including in Tegelen, Vaals and Roelofarendsveen. He made Wording (1968) for Eindhoven University of Technology. His sculptures can be found in Nijmegen, Wageningen, Zwolle and Alkmaar, among others.