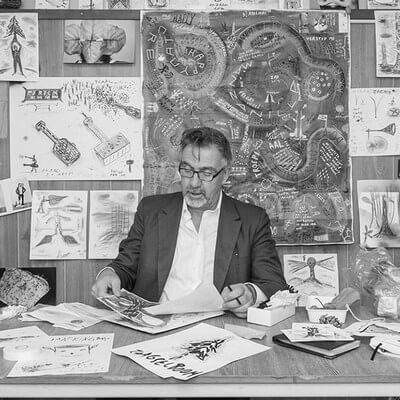 ‘I create interventions with language and gardens. Why not leave the garden out in the evening or take it with you to work?’

PJ Roggeband is a conceptual artist and publicist. He followed an audiovisual training at the Gerrit Rietveld Academy. He  has developed concepts about the role of nature and green management in public space. He has initiated controversial changes  with challenging interventions, such as his work ‘cheating seed’. Nature is a recurring theme in almost all his works.

Roggeband has developed several variants of the traditional shared garden, such as the lending garden and the college garden. The lending garden was created during the period that he worked as an artist in residence at the botanical garden in Amsterdam’s Zuidas. The visitor could choose from one of the many portable, compact and edible gardens fitted in a handy container. They could take their gardens to work, camping or a home location.

Since 2017, PJ Roggeband has been affiliated with LAPS, the scientific institute for art and public space at the Gerrit Rietveld Academy in Amsterdam. There he fulfills the role of guest lecturer and researcher.

People could participate in the Wander Safari, one of his expeditions, during ART ZUID in 2019. He guided visitors through unexpected details of the Amsterdamse School, such as hidden inner gardens and green gems, laced with anecdotes. In his view, gray and green compete for priority. He shed light on the views of the architect Berlage and the ever-increasing construction violence that troubles the city.

In 2020 Roggeband took the initiative for a project within WEEF, a manifestation about textiles and visual arts. For this he collected handkerchiefs with tears from people originating from Amersfoort.