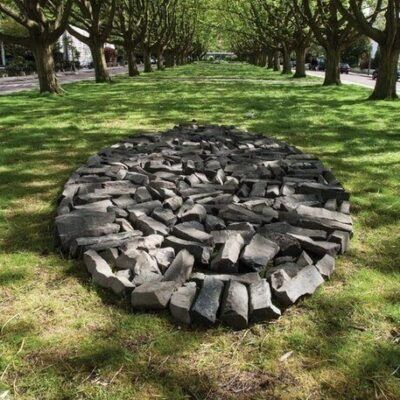 ‘I am not interested in making monuments, the other point of view is to leave absolutely no trace. Only take pictures and leave footprints. There’s a pretty interesting area between those two positions – like moving stones, creating works that disappear, or creating watermarks – ways to be an artist in a landscape.’

Richard Long is a sculptor, draftsman, painter and photographer; best known for his conceptual art and land art. In his hometown of Bristol, he attended the West England College of Art, then St. Martin’s School of Art in London.

Long photographs and manipulates the landscape around him. Many of his works are created during nature walks, such as A Line Made by Walking (1967), where he “draws” a line on the ground by walking back and forth several times.

The photos he takes of his interventions in nature are the only remaining attributes that can be presented to a wider audience. His land art can be seen mainly in Great Britain, but also in Spain, the Sahara and the United States. Richard Long has also made large sculptures and murals for museums. The sculptures usually consist of pieces of stone or wood arranged in a circle or other geometric figure.

In 2013, ART ZUID showed a number of works by Richard Long, entitled Basalt Lines / Basalt Elipse and Heaven and Earth Circle / Alpine Line. Basalt stones – grouped in different shapes – seem to lie under the trees in a natural context, as if they had been planned and planted there much earlier.

From 1968 Long has exhibited solo and in groups in Europe and beyond. Permanent displays of his work can be seen in the Netherlands (Kröller-Müller, Boijmans Van Beuningen and De Pont), Belgium and Germany.