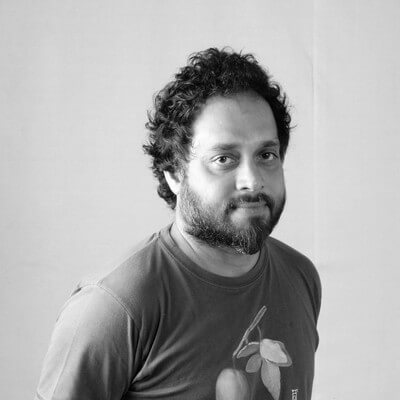 ‘From the moment I chose to paint, it was worth finding and exploring a language capable of responding to my time and building an archive’

Riyas Komu is a sculptor, painter, photographer and video artist. He was educated at the J.J. School of Art in Mumbai, where he lives and works alternately with Kerala; a district in the south of India.

With his works, Komu provides direct commentary on the identity crisis facing India. Rapid economic growth is accompanied by increasing religious problems. The artist knows from experience that ideology and religion are often at odds.

Komu’s installation ‘Undertakers’ consists of a neatly arranged row of wooden tombstones, each decorated with symbols of different religions and the red star of communism. The work made from recycled wood, steel and car paint suggests harmony, but this turns out to be an illusion. It is a commentary on the emerging fundamentalism, which isolates cultures from each other.

For Riyas Komu, art is a medium through which he provides social commentary on situations with which the world is confronted today. The early 1990s, when he entered the art practice, was a traumatic period in political history. He was deeply affected by the disturbing impact this had on human relationships and political imagination. His focus changed from textile design to autonomous art.

‘My Father’s Balcony’, an installation made of wood, metal and paint, was shown in 2011 during ART ZUID. His father’s balcony is a monument to the quiet, thoughtful world that his father represented; one which is now over.

Riyas Komu’s work has been shown in many solo and group exhibitions in New Delhi, Mumbai, Amsterdam, Venice, Paris and Stuttgart, and other cities.