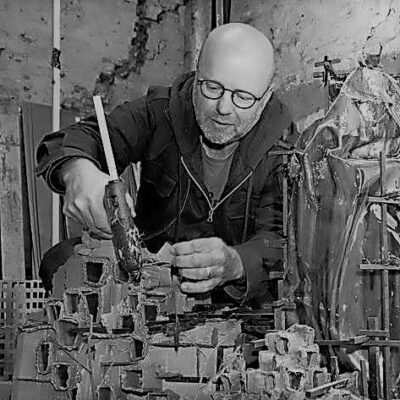 ‘Action Voerman started when I was about fifteen years old. I wrote a letter to Pérez de Cuéllar about cutting down rainforests.’

Rob Voerman is a sculptor, graphic artist, and installation artist. He started his education in garden and landscape architecture in Wageningen but did not complete it. He then studied sculpture at the Christian Academy of Visual Arts in Kampen (now ArtEZ) and then spent a few months at the Vestlandets Kunst Akademie in Bergen, Norway.

Transience, deconstruction, and architecture are central to Voerman’s two-dimensional work and sculptures. His graphic works, drawings, watercolors, and paintings usually show faded landscapes with utopian buildings from an unknown world. His drawings contain many futurological spherical and circular structures, without a definite beginning or end.

Voerman uses discarded materials in his three-dimensional work. It sits somewhere in between a primitive hut, a cave, and a machine. Different typologies of architecture, furniture and machines are also mixed in his buildings, which are often literally pushed together. His architectures are often dysfunctional; windows, doors and furniture have lost their function.

According to Voerman himself, until recently, both his graphics and his sculptures were determined by a dialogue between archaic agricultural forms and manifestations of modern, technically developed society. By combining order and structure, balance with chaos, transience, and deconstruction in his work, he provides a commentary on the over-organized society of the modern age.

Various museums, governments and institutions have work by Voerman in their collection, such as the Museum of Modern Art (New York), the Stedelijk Museum (Amsterdam), the Deutsche Bank, De Nederlandse Bank, and the province of Gelderland.

Especially for ARTZUID 2021, Voerman made the work ICE, a large installation made of steel, with glass, epoxy, and objects such as a barbecue and red lights. ICE does not only stand for water in a frozen state, but also for ‘In Case of Emergency’.