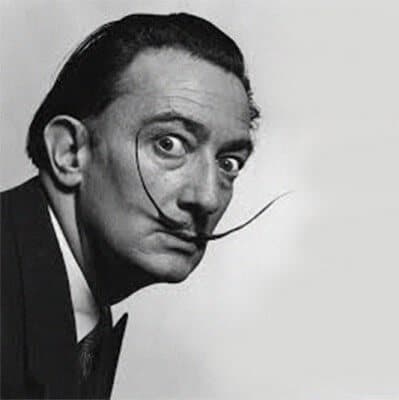 ‘The only way to spiritualize matter is to turn it into gold, into something valuable.’

Salvador Dalí is best known as a painter but was also a sculptor. At the age of ten, he took his first drawing lesson from Ramón Pichet, a friend of his father. Four years later, the young Dalí had his first exhibition in the city theatre of his hometown Figueres. From 1921 to 1924 he studied in Madrid.

As a young painter, he was very interested in iconic artists such as Goya, El Greco, Michelangelo and Velázquez. The latter inspired his pointed moustache. He turned his attention to Cubism and Expressionism. After his studies, he met Pablo Picasso and André Breton in Paris and joined the surrealism movement. Friendships with Luis Buñuel and Garcia Lorca have also had a major influence on Dalí’s life and work.

In the summer of 1940, Dalí fled to the United States; where he worked for years as a consultant and draftsman for Walt Disney. Fifteen years later he would return to Europe and live and work in Spain, Portugal and Italy. In his earlier work, sciences and the Catholic faith were sources of inspiration to him. In Rome he met the film and theatre director Visconti; Dalí designed sets and costumes for ‘As You Like It’.

Before the war, Dalí had supported the revolt of Franco and other officers that led to the Spanish Civil War. Later his course turned and he became a follower of the Spanish king Juan Carlos, who ennobled him.

Salvador Dalí described his works as painted dream photos; the realistic objects often seem to have no connection whatsoever. He regularly applied the trompe l’oeil effect (optical illusion) and the play with perspective.

Salvador Dalí died in his birthplace Figueres in 1989.