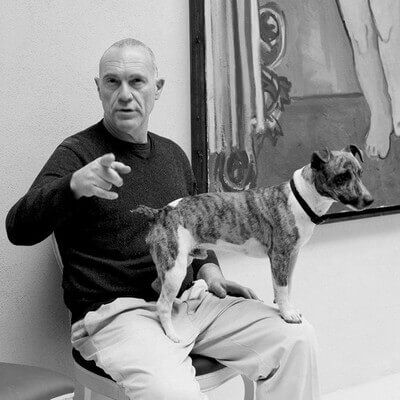 Sandro Chia is a painter, graphic artist and sculptor; educated at the Instituto d’Arte en de Accademia di Belle Arti in his hometown Florence. He is one of Italy’s leading painters, painting things as he actually sees them, or as he remembers them.

After travelling throughout Europe and to India he settled in Rome in 1970 where he developed a figurative style. Together with Enzo Cucchi, Francesco Clemente and others, he formed the Italian wing of neo-expressionism, the transavanguardia, which placed emphasis on form and colour. Chia developed a free, gestural style, in which he regularly reverts to aspects of traditional painting. Traces of Picasso, Rodin and Chagall are also present in his work.

In 1979 Chia held his first solo exhibition in Cologne. He spent the winter of 1980-81 in West Germany on a travel grant, later that year he travelled to New York where he resided for 20 years and taught at the School of Visual Arts. In 1982 he took part in Documenta 7 (Kassel), in 1984 he hosted a solo exhibition at the Metropolitan Museum of Art in New York.

Distinctive of Chia’s style is the occasionally plump appearance of human figures, often with a swollen body and a head that is disproportionately small. Figurative representations emerge on a colourful, decorative and virtuoso painted background. His work is alternately persistent and poetic and has been explained as an allegory of the artist’s struggle with (art) history. Since the 1990s Sandro Chia has been working with a stricter paintbrush and larger surfaces; figures and heads are more profound.