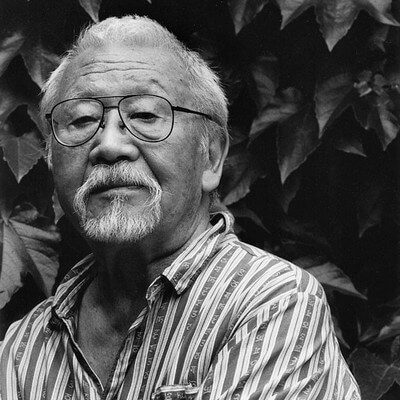 ‘All my warriors are attempts to allay fears, drive out demons, or deal with nightmares. (…) In my sculpting I try to shape the psychological scars left by all those penetrating experiences.’

Shinkichi Tajiri was a sculptor, painter, photographer and filmmaker. Born in Los Angeles, but of Japanese descent. In 1940 he received his first sculpture lessons from Donal Hord.

Like many other Americans of Japanese origin, Tajiri was called into military service in 1942. In 43 he volunteered, was sent to Italy, became injured in 1944 and hospitalized in Rome. After several other bases, he returned to the US in 1946 to study at the Art Institute of Chicago.

In protest against American behavior towards his population, Tajiri left for Europe in 1948. He studied in Paris with Ossip Zadkine, then with Fernand Léger, at the Académie de la Grande Chaumière. In 1956 he settled with his second wife in Amsterdam.

He had previously come into contact with the Cobra group and exhibited with them in the Stedelijk Museum. Under the auspices of De Nieuwe Ploeg, Tajiri had an exhibition with Carel Visser and Wessel Couzijn in Voorburg. He would become co-founder of the Group Amsterdam (1959). That same year he was invited to Documenta – and was invited again in 1964 and 1968.

A work of art by Tajiri is located in Amsterdam-Noord: Ontmoetingsplaats. Four statues of his hand are located in Venlo and serve as “guards” protecting the bridge against violence and war. Tajiri created a Japanese pebble garden at the Cobra Museum in Amstelveen.

Shinkichi Tajiri passed away in 2009. That year Guardian I was shown at ART ZUID. In 2011 it was the turn of Folded Overhand Knot, an enormous knot of aluminum, stipulating an entanglement of the east-west relationship for him. Overhand Knot was six meters high and shown at ART ZUID in 2017.