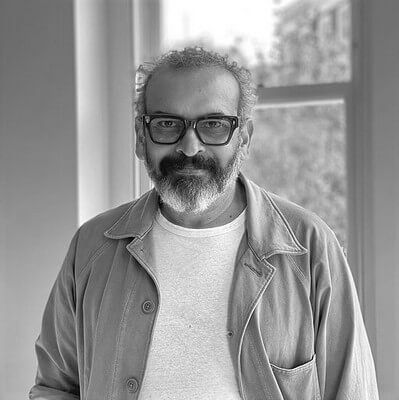 : ‘My themes are universal, although my references could be to Indian village traditions, i.e. the use of cow dung and the importance of food. There is a combination of local and global languages. Everyone can read and understand the paradoxes of our life in my art.’

Subodh Gupta is a sculptor, painter, photographer, installation, performance and video artist. Sources of inspiration are Hindu mythology and Bollywood. After a childhood in one of the poorest regions of India, he attended art school and moved to Delhi.

He developed a hyper-realistic style, starring many of the kitchen items that are ubiquitous in India, such as the steel tiffin boxes used by millions to transport lunch. But also milk buckets and bicycles. Large sculptures and installations reflect the economic transformation of his homeland.

Fame soon followed and he broke through internationally. In 2006, French businessman and art collector François Pinault bought Gupta’s sculpture Very Hungry God, an enormous skull made of aluminum kitchen utensils weighing more than a thousand kilos. It was shown at the Venice Biennale a year later.

The oil on canvas, entitled Saat Samundar Paar, was sold at auction in 2008 for 34 million rupis. Proceeds went to a fund for the victims of a catastrophic flood in Gupta’s home state of Bihar.

Subodh Gupta’s readymade called Et tu was exhibited at ARTZUID (2011) his work is clearly a nod to the work of Marcel Duchamp, who almost a century earlier provided the same Mona Lisa with a mustache.

Gupta is one of the most highly regarded Indian artists. His work is widely appreciated, but is also criticized for being repetitive. His Banyan Tree (2014), a life-size stainless steel sculpture is on permanent display at the National Gallery of Modern Art in New Delhi. In 2018 Gupta had his first retrospective exhibition at the Monnaie de Paris.