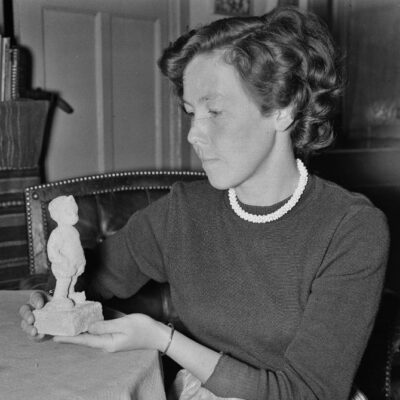 ‘To be honest, I like Anton Wachter with a hat more now. Yet it is actually a strange assignment: to make a man from the past that does nothing …’

Suze Boschma-Berkhout was born in Indonesia. Her father was secretary-general of Water Management and Reconstruction and later professor at the TU in Delft. Suze Berkhout was trained as a maternity nurse and, after the Second World War, was educated at the Institute for Applied Arts Education – later Gerrit Rietveld Academy, in Amsterdam. In 1954 she married Cornelis Boschma, civil servant for the preservation of monuments. They had five daughters and moved to Leeuwarden in 1963, where Kees became director of the Fries Museum.

Suze became known for her large number of figurative sculptures, which in many places in the Netherlands refer to historical or literary characters: Bartje, Ot and Sien, Afke’s ten, but also Herman Gorter, Mata Hari, and Rembrandt van Rijn and Saskia van Uylenburg. The vast majority of the statues are exhibited in Friesland.

In 1968 Boschma-Berkhout, on behalf of several fellow sculptors, requested culture minister Marga Klompé to amend the Dutch Copyright Act. According to her, the copyright of sculptors in the Netherlands was not properly regulated. Sculptures like Bartje were shamelessly and with impunity copied and depicted on souvenirs and other industrial products. The request did not lead to a change in the law, but in 1977 it did lead to the establishment of the Image Rights Foundation, which acted on behalf of artists against commercial ‘misuse’ of their work. At that time Boschma-Berkhout sold her exclusive rights to Bartje to an Asser cigar retailer.

Suze Boschma-Berkhout hardly exhibited. Nothing has been documented of the work she made for private individuals. Therefore, she lives on especially in the sculptures she created for public space.

During ARTZUID in 2021 there was an immense polyester Bartje – an enlargement of six meters of the statue that Boschma-Berkhout made in 1954. In the 1950s and 1960s, many Dutch mantelpieces featured small replicas.