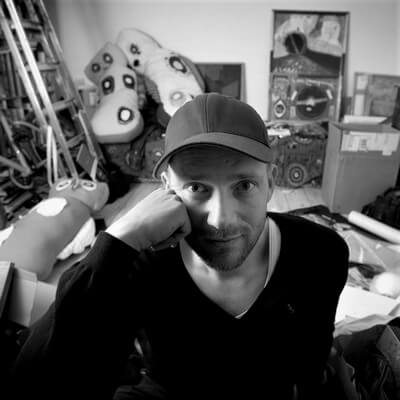 ‘I paint like how people prepare a lunch box. I have this hot pot constantly boiling and I throw all kinds of stuff in it.’

Tal R is a sculptor, painter, draftsman, collage and furniture maker. His name stands for Tal Rosenzweig and he lives and works in Copenhagen, where his parents moved when he was one years old. He studied at the Billedskolen and the Royal Danish Academy of Fine Arts. Tal R now teaches at the Kunstakademie Düsseldorf.

His painting style is referred to as ‘kolbojnik’, which literally means “leftovers” or “jack of all trades.” Tal R is one of the most popular contemporary artists. Due to his energetic style, he has been referred to as a “painting beast”. He draws inspiration from the works of Dumas, Picabia and Picasso. He himself has become an example to others.

He transforms everything in his environment into art. He combines materials and techniques, with which he consciously works in a playful and almost absurdist way. Tal R is a keen observer with great social involvement. In Scandinavia his work is classified among the ranks of the Northern European tradition of Baselitz, Jorn and Munch.

In 2015, a number of Tal R’s sculptures were exhibited during ART ZUID: Apple and Apple and Carob. Like his other sculptures, the parts of the work seem to have been taken from rubbish bins: beer cans, an old shoe, a light bulb, pieces of fruit and vegetables that appear to have been taken out by people or animals. By casting it in bronze, the parts become unified and acquire both eternal value and contemporary stature.

Tal R has exhibited in galleries and museums in Chicago, Dublin, London and Helsinki. In 2019, two Faroese artists bought a number of paintings from him to cut to pieces and use as canvas for a series of luxury watches. Following legal action, that process was stopped .