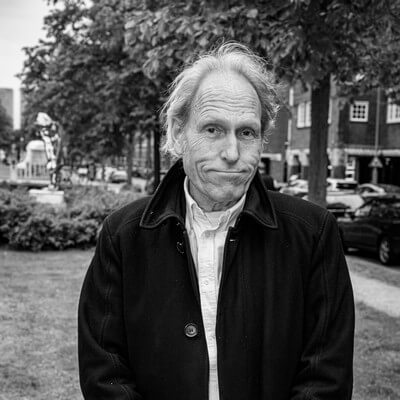 :‘Most of everything I do is function based – it has to work. No aesthetics. It’s not at all about making it beautiful. But strangely enough it often does. There’s some kind of sneaky artist in me somewhere.’

Theo Jansen is an artist-inventor. He was best known for his enormous beach animals, independently walking structures made of PVC pipes and adhesive tape or tie-wrap. Jansen studied physics at the Technical University (now TU) in Delft. Then he decided to become an artist. He painted for the first seven years. In 1980 he built a flying saucer with a diameter of five meters, which flew over Delft with flashing lights and squeaking which stirred the city.

His beach animals were initially intended to influence the dune landscape and the beach. With his computer he tried to select his designs, as animals had previously been selected in evolution. His first beach animal was Animaris vulgaris – “common sea animal”. Jansen gradually became interested in running technique, which he improved with the help of simulation. Later he also used wood, cardboard and PET bottles for the beach animals. His animals toured museums in Belgium, France, China, Japan, Australia, Argentina and the United States.

Jansen’s moving sculptures are part of a tradition of Alexander Calder (1898-1976) and Jean Tinguely (1925-1991). The images surprise the audience, look like they are really alive, because they move. They are as endearing as they are repulsive and thus cause emotion. This certainly also applies to ANIMARIS MODULARIS and ANIMARIS LONGUS, which were shown in 2019 during ART ZUID.

For years (1986-2008) Theo Jansen had a column in the Volkskrant, a number of which appeared in book form, entitled Klimmen in de Lucht and De Grote Fantast.

He was Brilliant Artist of the Year 2017; a year later he became artist of the year. In the same year he was awarded the Haagse Cultuurprijs.