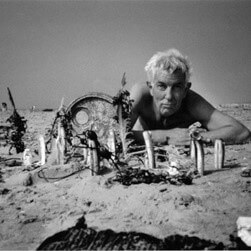 ‘Zen Buddhism is an invisible hand that prevents over-thinking and helps you take action from an endless sea of creative possibilities. It is imperative that you work a lot, preferably every day to keep the power going and to control your eyes and hands.’

Theo Niermeijer was a sculptor, painter, graphic artist, installation artist and architect. He was also a contemporary mystic. He followed courses in Amsterdam, Antwerp and Warsaw.

Metal was Niermeijer’s material: he used copper and zinc to make etchings, (sheet) iron and stainless steel to make sculptures. He also used metal in his paintings (ferro prints) and reliefs. Both at his shipyard in Amsterdam and in a northern French village, he assembled scrap iron into statues with symbolic and meditative charges. The effect of time on the material – rust – was a necessary means of expression for him. The effect of rainwater on metal and paper is reflected in his characteristic “rust drawings”.

In his travels to the Far East, he became influenced by Chinese and Buddhist philosophy. What he saw and experienced on his travels, he incorporated into his art. His idol, the American-Japanese-Dutch artist Shinkichi Tajiri, often used iron and aluminum aswell. His substantive influence, stems from his wisdom which marked the way to enlightenment.

Niermeijer’s work was shown three times during ART ZUID. To begin with, the first edition (2009) with Hakuin’s Home made in 1986. Here the influence of Tajiri could be clearly seen. In 2013, the steel circle Vairocama was shown, with a diameter of three meters and a meditating Buddha in the center. Four years later, two sculptures of Niermeijer were shown: Perception (1990) and Non Verbal (1980).

Niermeijer’s work was purchased by, among others, the municipality of Amsterdam and the ABN-AMRO bank. Theo Niermeijer died in 2005.