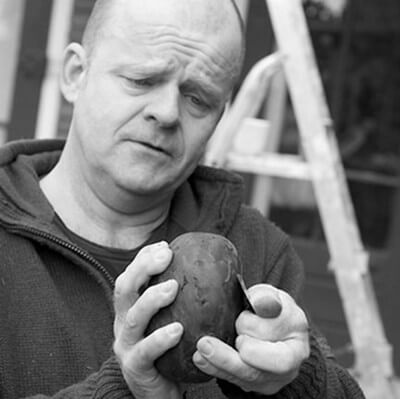 ‘The environment is very important and I can’t help but make it fun.’

Tom Claassen is a sculptor. He studied at the Academy of Visual Arts Sint-Joost in Breda, from 1984 to 1989. He is best known for his human and animal figures, which are depicted in a highly simplified form. He works with a variety of materials: rubber, wood, jute, bronze, iron, stainless steel, plaster, aluminium, concrete, ceramic and polystyrene.

In 1992 Claassen was selected for the Prix de Rome for sculpture, visual arts and publicity. He also received the Encouragement Prize from the City of Amsterdam (1993) and the Charlotte Köhler Prize (1994).

Claassen’s work is situated on the border between nature and culture. It is firmly anchored in a sculptural tradition, but at the same time has an original, playful and personal touch. Despite their enormous size, the animals have an endearing character. The extreme magnification provides an interruption in the landscape or cityscape. The often soft and round shapes, in combination with the animal’s clumsiness with its weight, invite you to stroke. But this is deceptive; the material is not soft and inviting, but cold bronze. Juxtapositionally, the sculptures that seem hard and unattractive are made of a softer material; rubber.

The Kröller-Müller Museum in Otterlo has included several sculptures by Claassen. Other works are located at Castle Nijenhuis (Heino), in Utrecht, Apeldoorn, Amsterdam, Rotterdam, The Hague, Tilburg and Vlaardingen. For example, many people know the group of five elephants at the intersection of the A6 and A27 at Almere or the two sitting figures at Schiphol.

Less directly visible is the sculpture Rhino (2004) in the recess of a lock near IJburg (Amsterdam). It is approximately levelled with the street, so it is hardly noticeable from a distance, especially when the water in the lock is high, the Rhino is hardly visible.