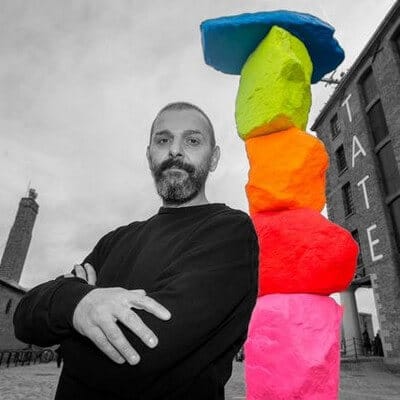 ‘Good art revolutionizes your whole being. It’s something that holds you back and slows you down.’

Ugo Rondinone is a sculptor, mixed-media artist, photographer, painter, land art and video artist. He studied at the Hochschule für angewandte Kunst in Vienna. Rondinone, the child of Italian parents, has lived and worked in New York since 1998.

His work is varied, as are his sources of inspiration. He takes phrases from pop songs and everyday exclamations. He uses it to create rainbow-colored and neon-lit sculptures and installations. For example, the installation Clockwork for Oracles (2008-2010) consisted of mirrored works, showing pages from local newspapers on the wall.

In 2011, ART ZUID showed Rondinone’s Sunrise east (June, July, October, December). They were four large sculptures of two-meter high heads, made of bronze and painted with silver car paint. Each of the four has a different expression. After all, the sunrise of each of those four months is different. Imperturbable and disturbing, just as Samuel Beckett, one of Rondinone’s idols, who also evoked alienation with his characters.

Ugo Rondinone made a series of birds, horses, and fish cast in bronze. Totems would become something of a trademark. ‘Human Nature’ is a group of nine monumental figures made of rough stone, resembling rudimentary rock totems. ‘Vocabulary of Solitude’ includes 45 sculptures of clowns positioned and named after everyday tasks such as sitting, walking, or showering. They depict a 24-hour day in an individual’s life.

He became known for his temporary Seven Magic Mountains (2016-2021), which are seven fluorescently painted totems of large stones almost ten meters high. His painting series ‘Small Sun’ evokes feelings of euphoria and at the same time of reflection. He explores the world around him and his place and identity in it.

Rondinone has had major solo exhibitions in Greece, Spain, the United Kingdom, France and Austria. In 2007 he represented his native Switzerland at the 52nd Venice Biennale.