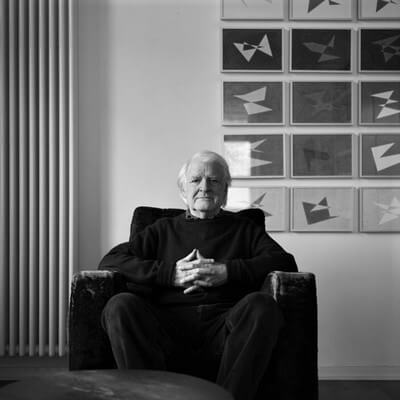 ‘I built my language in the quarry.’

Ulrich Rückriem is a sculptor and completed his training in Düren. He then worked on the restoration of the Cologne Cathedral, which was badly damaged during the second world war. Soon afterwards, he started his own studio and established himself as a free artist. Rückriem is counted among the minimalist and conceptual movement.

Initially he made sculptures from wooden beams but from 1968 he also started making stone sculptures. Rückriem cuts, divides and splits a large block of stone, often hard granite or dolomite, into rectangles and squares. Then he puts different parts back together, but with changes. Broken edges and boreholes become part of his work. This became his trademark.

For the artist, stone is part of our ancient earth. That is why he calls it “first nature” and gets his material from all over the world. Bahndamm is a work consisting of seven square, upright pillars placed at different distances from each other over a length of eleven kilometers on the route of a railway track that has never been used. It starts on the border of the Netherlands and Germany and ends near Museum Insel Hombroich.

From 1969 Rückriem worked with Blinky Palermo in a studio in Mönchengladbach. For years he also worked in Ireland and Normandy. He was a professor in Hamburg, Düsseldorf and Frankfurt am Main.

Ulrich Rückriem had many solo and group exhibitions. His sculptures were shown on Documenta 5 (1972), 7 (1982), 8 (1987) and 9 (1992) in Kassel. His work is represented in numerous collections and museums, such as in Munich, Nuremberg, Berlin and Cologne. In the Netherlands, his permanent work is in the Kröller-Müller Museum (Otterlo) and at the Baasdam estate in Tubbergen.

ART ZUID presented Rückriems Königsgräber in 2015. Two stones were in the middle of the diagonal axes of the Apollolaan, with 50 cm between them. Both blocks show subtle differences between them. They radiate a timeless simplicity.