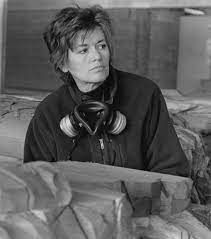 ‘We stayed in wooden barracks, with rough wooden floors, rough wooden walls and rough wooden ceilings. So somewhere in my blood I immerse myself in that well.’

Ursula von Rydingsvard makes both sculptures and paper work. She was born in German Danish. Her parents – a Polish mother and a Ukrainian father – were farm workers, who were forced to work in Nazi Germany after the occupation of Poland. After the war, the large family spent eight years in refugee camps and then left for the United States. Both her father and later her schizophrenic husband humiliated her. In 1975 she decided to move to New York with her daughter.

Von Rydingsvard studied art in New Hampshire, Miami, California and New York, where she has lived and worked for some time. She participated in many group and solo exhibitions from the beginning of her education. Her works have been exhibited around the world, including in museums in New York, Yorkshire and the Venice Biennale.

She is one of the few female sculptors worldwide who works on a monumental scale. Her immense wooden sculptures show her enormous willpower and fighting spirit – exactly the qualities she needed to survive as a war child.

In her studio she constructs solid cedar wood abstract sculptures layer by layer. These sometimes serve as a model for a bronze shell. Gradually, Von Rydingsvard developed her own and labour-intensive method, in which she notches wood blocks with a circular saw, stacks them on top of each other, screws them, glues them and rubs them with granite. As a result, her sculptures appear to have been formed by erosion.