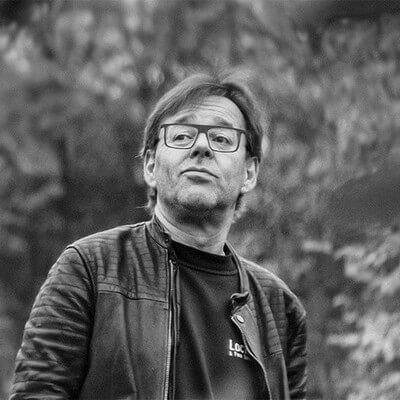 ‘It is more important to keep the student style and not to conform, than to be successful as an artist. Thirst for recognition and success can be an obstacle to achieving new things.’

Wim Delvoye is a sculptor, performer and video artist. He was educated in Ghent and in 1990 represented Belgium at the Venice Biennale. Two years later he showed pigs at Documenta IX (Kassel), which he tattooed under anaesthesia with the help of a veterinarian. In 2003, however, his pigs were banned from the poetry summer in Watou.

Delvoye’s work combines an interest in craftsmanship with production processes not directly related to art. His Caterpillar # 5 that was featured at ARTZUID is a typical example of this. Irony and banality often play a role in his work. He does not shy away from provocation, but at the same time, he presents his work as very serious. His creations spark controversy and induce discussion.

He plays with “high” and “low” culture and mixes social orders and classes. Meanings and associations often turn out not to be what they seem. The pig was traditionally depicted as a smart animal but has become a product for the meat industry. A pale pink equivalent of man; a figurehead of stupidity.

His work Cloaca manufactures turds, it serves as a metaphor of creation itself but at the same time, it resembles its perspective. Delvoye is more concerned with social questions than with the form of his work. Art must shock even if this comes at the expense of aesthetics.

Delvoye’s work is included in the collections of major art museums. In 2008 at a public auction, he bought Corroy-le-Chateau, to set up a museum of contemporary art. However, it never got off the ground. Later he acquired a castle in Melle, where he came into conflict with the government about construction and environmental violations.