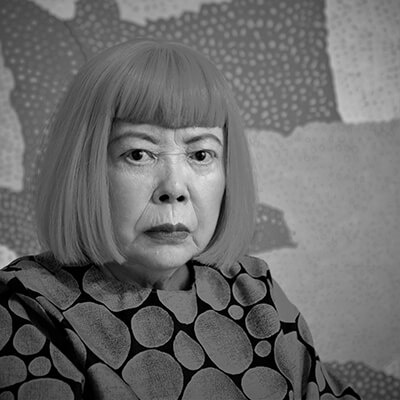 ‘A polka dot has the shape of the sun, which symbolizes the energy of the whole world and our life, but also the shape of the moon, which is calm. Round, soft, colorful, meaningless and ignorant. Polka dots become movement … Polka dots are a way to infinity.’

Yayoi Kusama is a sculptor, painter and installation artist. She studied at the School of Arts and Crafts in Kyoto. Her first works – watercolors and gouaches – were exhibited in 1952. Three years later she was invited to participate in the 18th Biennale of the Brooklyn Museum (New York). In 1956 she decided to emigrate to the United States.

From 1965, she performed happenings, including in Central Park and on the Brooklyn Bridge, which were often terminated by the police. She painted walls, floors, objects, herself and naked assistants almost obsessively with polka dots. These would become her trademark. In the meantime she was struggling with psychiatric problems, which she hid from her audience.

Her work was rejected for the 1966 Venice Biennale. But because of her illegal presence with the happening ‘Narcissus Garden’, she managed to draw attention to herself. In 1973, Kusama returned to Japan, where she has since volunteered to stay in a psychiatric facility, with a studio nearby. Twenty years later she was officially invited to the Japanese pavilion of the Venice Biennale.

‘Flowers That Bloom Tomorrow’, a work from 2010, was exhibited during ART ZUID in 2011. The image – with polka dots – radiates energy and future promises.

On the occasion of Yayoi Kusama’s 90th birthday in March 2019, Museum Voorlinden showed a number of iconic works from its own collection. Two of those were Infinity Room and Infinity Nets – her now world-famous dotted pumpkin.