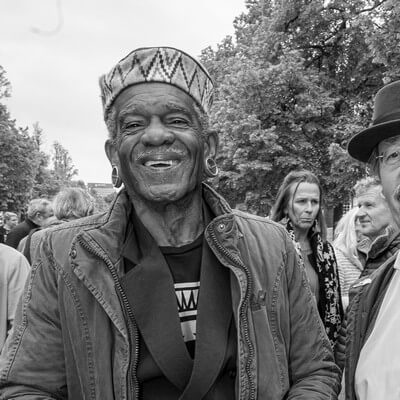 ‘If you have a little pride, a little character, you wonder what you’re looking for in a country that looks down on anything with colored skin.’

Yubi Kirindongo is a sculptor and self-taught artist; he started as a draftsman and painter. At barely twenty years old, he came to Europe as a stowaway on a freighter. In Germany he worked as a boxer and nurse, until his drawing talent was discovered. In 1973 he took part in an exhibition in a church in The Hague and was called promising.

In 1976 he returned to Curaçao. There he made works from scrap metal and waste. Someone once referred to this as “Renaissance art.” He allows old, seemingly useless materials to be reborn into new, proud sculptures that rise like a phoenix from the ashes. He is able to combine incongruous things. The material invites him, challenges him to convert the vision into a tangible form. Human freedom, the denunciation of slavery and the revitalization of apparently dead things are Kirindongo’s themes. He made a monument in Curaçao for the slave revolt of 1795 and is a cultural icon there.

During ART ZUID 2011, Kirindongo’s work Equus, which he made the year before, was shown. It is a horse figure with a raised front leg, composed of braided iron strips.

Yubi Kirindongo has participated in several international events, such as the Havana (Cuba), Johannesburg (South Africa) and Sao Paulo (Brazil) biennales. In his own country he received special recognition through the award of the prestigious Cola Debrot Prize by the government of Curaçao.