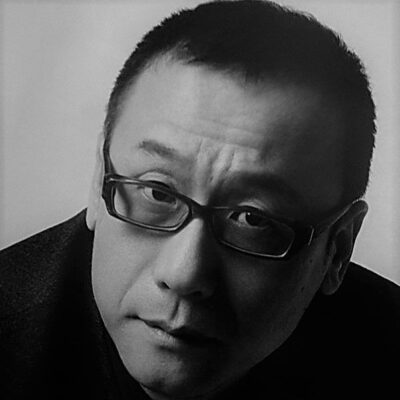 ‘The best art must be accurate and irreplaceable. I do not consider my works to be purely sculptural. I make contemporary art.’

Zhan Wang is a sculptor, photographer, video artist and installation builder. He studied art at the Beijing Industrial Arts College. He then studied sculpture at the Central Academy of Fine Arts. Only after these courses did he immerse himself in modern sculptors; before that, the emphasis was strongly on the Soviet style.

Many of his works feature simplistic objects that serve to tell a complex idea. Many of these ideas relate to Chinese culture. Since his first exhibition in 1993, he has exhibited both in groups and solo.

Zhan Wang’s style mainly focuses on abstract forms. He calls these large, highly textured rocky pieces covered with chrome: “floating rocks.” Also known as Scholar Rocks. In Chinese culture, the rock has significant value. They are said to contain the purest energy and were collected as artifacts and meditation tools.

The concept of the rock, or placing rocks outside modern structures, led to Zhan Wang’s “artificial rocks.” He sees his sculptures as a representation of Chinese history in the postmodern world and as authentic. He makes the rocks by placing flexible steel sheet over the rocks and hammering them so that they get the same surface area of ​​the rocks.

In the summer of 2021, 45 Degrees Artficial Rock could be seen during ARTZUID, a sculpture he made in 2014. Unyielding like a force of nature, almost four and a half meters of stainless steel rose from the lawn on Apollolaan, at a 45-degree angle.