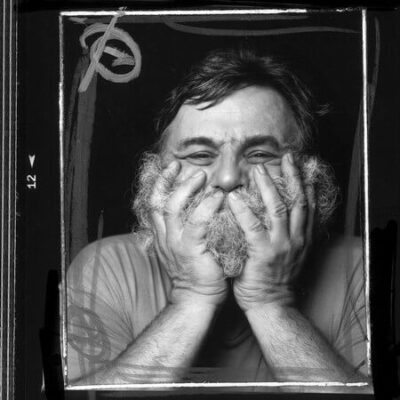 ‘Only the order was determined by the group, everything else was allowed, no one had the right to veto. The painting process unfolded in solidarity as well as in antagonism.’

A.R. Penck was a sculptor, painter, graphic artist and jazz drummer. His real name was Ralf Winkler; he also used other pseudonyms. He took drawing lessons for two years and continued his training as an apprentice draftsman at the East German advertising agency DEWAG.

After that (1956) he enrolled four times in vain at two art schools in East Berlin. His talent was thought to be inadequate; he himself believed that he had been rejected on political grounds. He worked as a stoker, night watchman, letter deliverer and grand artist.

In 1966 Winkler became a candidate member of the Verein bildender Künstler, under the pseudonym A.R. Penck, after the geomorphologist Albrecht Penck. Gradually he had more and more problems with the Stasi (State Security Service) of the GDR. His paintings were confiscated and his membership of the artists’ union was repealed.

Penck joined the Lücke artists’ group in 1971. Five years later he met his West German colleague Jörg Immendorff, with whom he started working together and later formed De Nieuwe Wilden with Baselitz and Lüpertz.

In the late 1970s his studio was ambushed many of his artworks were destructed or stolen. This led him to the decision to leave the GDR in 1980. The 1980s brought him international fame, the art prize of the city of Aachen and a professorship at the Kunstakademie Düsseldorf.

Köln-Antidom, Penck’s enormous bronze sculpture that appears to be on the verge of falling, is a direct reference to the bombed-out Cologne Cathedral. The sculpture was shown at ART ZUID in 2013. Two years later, Ich-Selbstbewusstsein, Penck’s sculpture from 1987, and Future of the Soldiers, created in the same year, were on display.