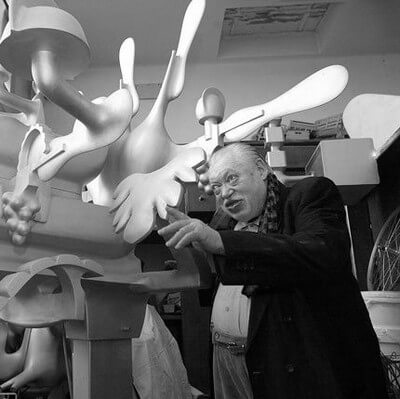 ‘The route is the goal. I see formal developments in my work, which I also follow. I am grateful for them; they help me do what I want to do. I am very happy to be active in a world as big as sculpture.’

Bruno Gironcoli was a sculptor and printmaker. His work consists of assembly and installation art. He was one of the most important sculptors of his generation. Trained as a goldsmith, he completed this vocational training as a journeyman in 1956. Then he studied at the Hochschule für Angewandte Kunst Wien. A stay in Paris in 1960/61 introduced him to the work of Alberto Giacometti.

It was the start of a productive period in which he built up an idiosyncratic oeuvre, which is characterized by a distinct and personal visual language. The focus of his artistic work was on man and the abysses of human life. His aesthetics of intemperance and opulence regularly gave rise to excesses and curls and inspired countless younger artists.

From the beginning, Gironcoli’s drawings were more than designs for his artworks. They transcended his ideas about concrete works on paper.

In 1977 Gironcoli was put in charge of the sculpture department at the Akademie der bildenden Künste Wien. He received the Great Austrian State Prize in 1993. He represented Austria at the 2003 Venice Biennale.

Since 2004 the Gironcoli Museum has been showing a major retrospective exhibition in the Austrian state of Styria. The building in the Tier- und Naturpark Schloss Herberstein measures about two thousand square meters and there are about thirty sculptures by him on display.

A year before his death in 2010, his Fingerhüte was shown at ARTZUID, edition 2009. It is a nod to the coldness of the world of mechanics.